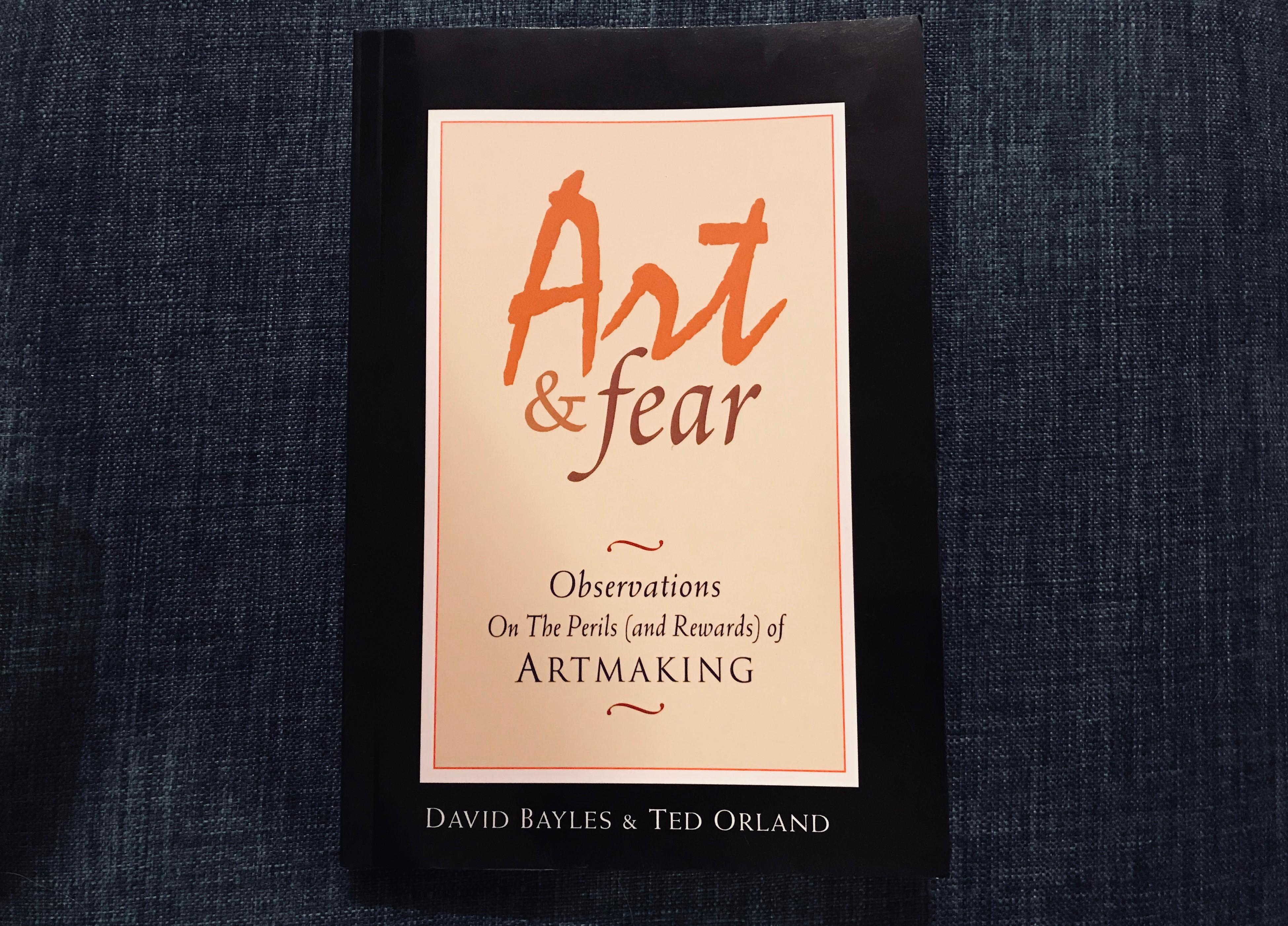 I read "Art and Fear"... And it wasn't quite what I expected. These are my thoughts and feelings about what the book presented.

At the recommendation of a YouTube video, I picked up this book to try and help myself succeed a little more. Art and Fear, written by David Bayles and Ted Orland was meant to help me find some direction and the confidence to finish things. I’ve read some inspiring books, some that have helped to change me a little for the better. I had high hopes for this book too.

Relying on the self-help genre to form opinions and habits isn’t always the best plan. But there is something to be said of learning from the mistakes of others. I always take these books with a grain of salt, and work out how to adapt them to fit in with what already works for me. Often, they contain really good advice that can really impact the way I see things. And to be fair, Art and Fear did give me one of those moments. But on the whole, I’m not sure I learnt a lot from my time reading it. Nevertheless, notes were taken and views formed, and that’s what I want to unpack and talk about.

I actually have a lot more positives than negatives to talk about. This book wasn’t as life-changing as I’d hoped, and I’d heard most of it before, but it was refreshing to think about things in a different way. The wow moment was towards the end of the book, and I’m still not sure how I can respond to it. But the general advice and observations presented were incredibly insightful in their own way.

Art is totally subjective. The first thing I noted down when reading Art and Fear was “what even is art?”. The answer really is anything. And the book refers to it as such. It doesn’t specify art as something painted, or written or sung. Rather, art is anything created. And by this definition, I could be confident that what I do, the things I make, are in fact, art.

Honestly, this was a very powerful thing to take ownership of. I question so often if what I do it real or worthwhile, it was nice to have a random little reassurance that my creativity is valid. There’s another little note that says “my trade is my art”. I could use the web as an artistic medium in the same way I use paints or pencils. I’ve done it before, but somewhere along the way I got lost into the world of corporate design.

I want to get back into the idea that anything I create, good or bad, is art. That I evoke emotion with a website, or game, or comic. That anything I make is a valid expression of me. But I also feel that this is going to be hard to execute and persevere with.

This is something I learnt at university, and I learnt it fast. My early assignments, when I had an idea and just ran with it, were of far inferior quality to my later projects. My first year at school was spent learning the design process, and how a project will evolve. I also see this with data analysis. Even with thousands of hits to a website, I still have to wait to understand the trends. One days worth of data is useless, no matter how much data is generated. I’ve had to learn patience, and when to just leave things to sit. 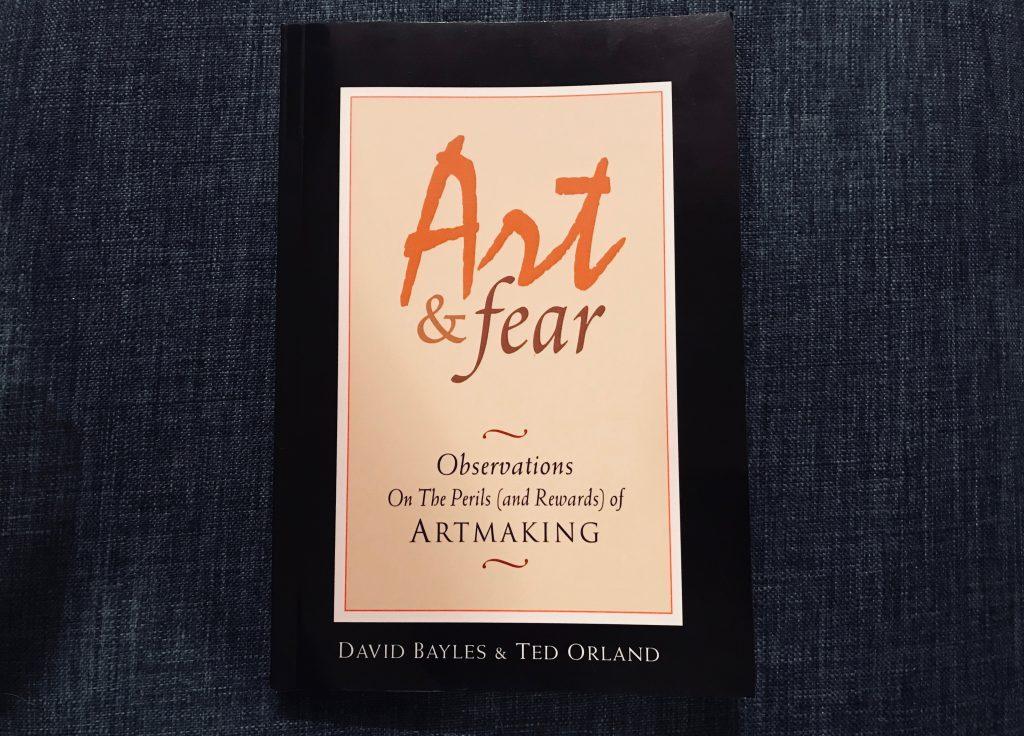 A majority of Art and Fear is spent discussing process, and I think that was the most disappointing part of the book. It might be that I picked it up through necessity where others needed it taught, but it seemed that most of my notes revolve around just being and doing, rather than focusing on the end piece. It’s not bad advice, it’s just not the advice I need. It seems like common knowledge that practice will beget improvement. There was a whole chapter dedicated to making more. But this is less than helpful when most of my week is spent at work, unable to create anything of substance or even improve my skills.

And, the emphasis placed on this has had one very profound and immediate consequence on me. I’m mad anxious about not creating things all the time. Even writing blogs, which I’ve found to be very useful, makes me worry that I should be practicing how to draw people, or paint shadows, or build a new piece of code. I suspect the is the opposite of the books intention. Bayles and Orland wanted to inspire creativity, not induce it out of panic.

The one major redeeming point of Art and Fear was in the middle, buried in a chapter called fears about others. It spoke of a story from Charles Eames and how he dealt with people misunderstanding his work.

Eames once designed a museum exhibit the featured a fifteen foot long wall chart (set in textbook-sized type and equally small pictures) delineating the entire history of mathematics. when asked who on earth would possibly read the whole wall, he calmly replied that each person would absorb about as much as he/she were able to, and just slough off the rest. And, he added, that would include some who would make connections between the data beyond what Eames himself could perceive.

My first reading of that passage blew my mind. I had to flag the page and return to it later. Honestly, I had no idea how to process it. But it was worthwhile reading. Each time I think on it (which is often), I unpack it a little more. Often, especially when making something digital, I get annoyed with people who pass it off as “magic” and don’t appreciate the effort that goes into creating something in this regards. But this piece is a not-so-subtle reminder that not everyone can see those connections, and that there are also those who can see far further than what I’ve managed to accomplish.

Out of all the things this book said to me, that is the most poignant. Just because it is not fully understood by someone (or many someones) does not diminish the effort taken to create it. It doesn’t make it worth less, and it doesn’t speak poorly of it either. It just is. And when someone comes and asks the technical questions, who shows a much further interest in the topic than I ever imagined possible, I’m prepared to be blown away then too.

I don’t know that I’d recommend buying this book. But if you can borrow a copy from a friend or library, go for it. It’s not a waste of time, just not as valuable as I’d hoped. But that’s the nature of art. It’s different things to different people. Maybe it will help you more than it helped me.

This blog contains referal links which pay me a small amount for each purchase. By shopping through these links, you help support me at no addional cost to you. Thanks!