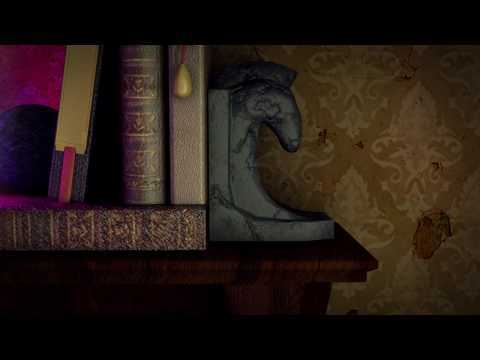 “The Alchemist” is a 3D modelled poster, with a focus on light and texturing. Each element was modelled in Maya, and textures were created in Photoshop. The final composition was rendered from Maya, and adjustments were made in After Effects. Although meant to be viewed as a film poster, “The Alchemist” is viewable as an animated short, showcasing the entire scene and the models within it.

Included in the initial concepts for a 3D poster were terrariums, magicians shelves and a land-bound shipwreck. Each of these ideas had good and bad points, with some having the potential to be striking final pieces. However, taking into account the time constraints, a magician or alchemist’s study was chosen for further investigation. The creation of detailed sketches help explore the placement of objects within the final poster.

Several things changed between iterations of the shelf. The number and placement of books throughout the scene changed during modelling, as they were created from detailed references. So too did the placement of the shelf within the composition, as well as the addition of text. The main detail was in the horse-head book ends, which were carefully modelled to resemble real marble bookends. A dark marble texture was chosen to further create an air of mystery.

The entire scene was lit and animated within Maya, with only minor corrections and transitions being completed in After Effects. This combination was also used to create the opening trailer for Massacre in Melbourne, an interactive walking tour. With completely different visual styles, “The Alchemist” provided the foundation of knowledge to complete a much more complex animation, a walk cycle.